This year Hubby & I decided to stop talking about it and actually purchase tickets to the St. Louis Cardinals home opener on Monday.  The game was at 3:15, so we decided we would simply drive up (3+ hours) in the morning...watch the game...and drive back the same night (3+ hours).  We waited until Monday morning to buy our tickets from StubHub and felt like we got a pretty great deal on some decent seats, 300-level, between home plate & first base. 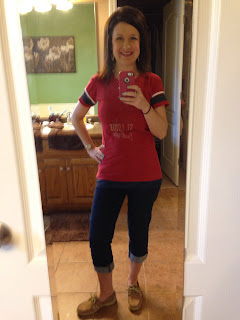 While I finished getting ready, Hubby took Elyse to my parents' house and then we headed out.  The big highlight of the drive was when we came upon a semi-truck that had some ventilation on the side.  I immediately wondered if it was hauling some sort of animal, like turkeys or chickens, or cows.  Imagine my surprise as we become even with the truck and Hubby yells out, TIGERS!!!  Yes, there were at least 3 full-grown LARGE tigers pacing in front of the ventilation windows!  I was so shocked I didn't even have time to grab my camera--Hubby was going to slow down so I could snap a picture, but the truck exited before we got the chance.  HILARIOUS, to see tigers as we were driving down I-44.  There had been a circus in the area for the past several days, so we can only assume the tigers were en route to their next circus destination! 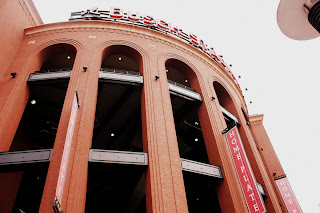 Anyway...Hubby & I had never been to Opening Day so we have dubbed ourselves "Opening Day Rookies."  Just a quick pointed for anyone who might even consider going to Opening Day in St. Louis.  Get there EARLY!!!  And by early, I don't mean 30 minutes, or an hour, or even 2 hours...I would probably recommend getting to the ballpark as EARLY as you possibly can!  And no matter what kind of tropical vacation you have coming up, that you might want to buy some new clothes for...do NOT stop to go shopping...just go straight to the ballpark. 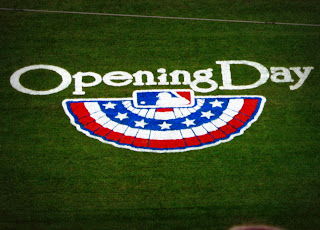 Yeah...Rookie mistake.  Opening Day ceremonies started at 2:30, so silly us...we thought if we got to the ballpark around 2 that we would be fine.  Man we weren't thinking AT ALL.  It was an absolute madhouse down there.  I honestly thought that we might have drive all the way to STL and have tickets in hand, only to not be able to find a parking place and have to listen to the game in our car!

We finally found a parking spot at about 2:30, which was oh you know...just a mile away from the stadium.  We practically ran to the entry gate, only to have to wait in line for another 10-15 minutes.  I think we finally made it in the doors a little bit after 2:45.  Instead of going to our seats, we stood at the top of one of the lower sections just so we could see the festivities.  Our seats were another 3 levels up and I knew we'd miss so MUCH more if we went on up.
It was an absolutely beautiful day, and the atmosphere was so much fun to be a part of.  The game started off pretty well, and I honestly thought we were going to pull out a win for the home opener...but then the top of the 9th came.  And LOTS of people left... 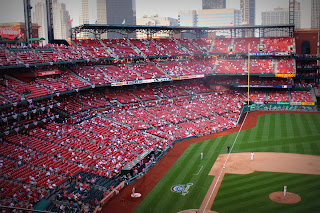 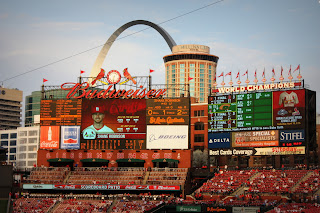 Even with a loss, Hubby & I still had a fabulous time and there will be more Opening Day experiences in our future.  Hey, at least we got a good work-out in with our 2 miles of walking and we also ended up parking for only about $1.70--which is all I put in the meter!  That has to beat the $30+ we would have paid to park closer to the stadium.  But next time, we'll spend the night downtown or at least just get there mid-morning to just enjoy the festivities with everyone else!
Posted by Lauren at 1:43 PM

Tigers, and Cardinals, and CRAZINESS, OH MY!

Love this! I can't believe you got tickets MONDAY MORNING! This is something Nathan and I have always wanted to do, maybe someday! Glad you found a parking spot, that would have been horrible. And shopping is always a must when your in St. Louis!

Looks sooo fun! I want to go next year!

How fun! And you look fabulous!!

Yahh for opening day...I'm so excitd about our home team too!

What a fun day. Sorry the Redbird disappointed everyone on opening day. My hubby was there (as usual) (you can see his office building behind the scoreboard in your last photo) and he came home so bummed. I'm glad you got to go though. If you ever want a place to crash (even with Elyse), we have 2 extra bedrooms!! :) Just saying.

I saw you on another blog and since we have the same name, figured that I should visit :)

That's great that you were able to go to the opener. Too bad about the game, but I'm a cubs fan so I am a bit desensitized to disappointment at this point. I actually live a few miles north of Wriggly Field. Whenever the Cubs play, traffic is messed up for hours and trying to park within a mile and a half of the stadium is insane.