Hubby & I made dinner reservations to celebrate our anniversary & we headed out to a local steakhouse called Flame. They normally have fantastic food & we weren't disappointed. We both ordered filet mignon & they were both cooked perfectly! We also got a free dessert because Hubby told them it was our anniversary when he made the reservations. Flourless chocolate cake with raspberry sauce & whipped cream...YUMMM!!!! 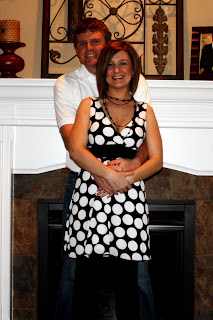 A mini-photo session with the self-timer! 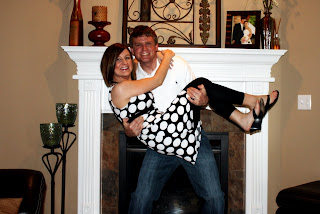 Another fun shot before heading out to dinner!
Since we're trying to watch our budget & we are headed to Florida with my parents next week, we opted not to do official anniversary presents. Besides, the traditional gift for a 2nd anniversary is cotton...there really isn't anything personal about buying my husband a shirt, a towel, or a set of sheets for our anniversary. So, I chose a sweet Hallmark card & called it good. However, I had hinted that flowers are always welcome. ;o) When I got home from work there was a beautiful bouquet of spring flowers. What a great Hubby I have! 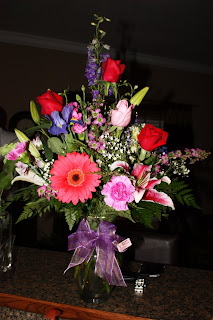 awww happy anniversary!! you guys look so cute and that dinner sounded yuuuumy!!!

What cute pictures - and I love your fun polka dot dress! (o: Glad you had a fun anniversary celebration! (o:

I love the header of your blog. And those flowers are beautiful! Happy Anniversary!