Before Elyse's birthday party last year was even in the record books, I'd already come up with a simple and perfect theme for Elyse's 3rd Birthday.  Originally I had planned on doing Pancakes & Pajamas, but with Elyse's love affair for sprinkled donuts, the party quickly morphed into Donuts & Pajamas.  And honestly, this was way easier than pancakes anyway!

When we realized that Nora & Elyse would not officially share a birthDAY, but would be born within at least a week of each other...the simplicity of this party theme was even more attractive!

Some people might think I was crazy to even have a birthday party...but it wasn't my 3 year old's fault that mommy got pregnant and had a baby near her special day.  A birthday party was not going to be missed...it was just a little scaled back this year!

We of course gave Elyse the presents from us before all the guests arrived.  We bought her an easel from IKEA and then filled a cart with new art supplies.  We've already gotten LOTS of use out of that present! 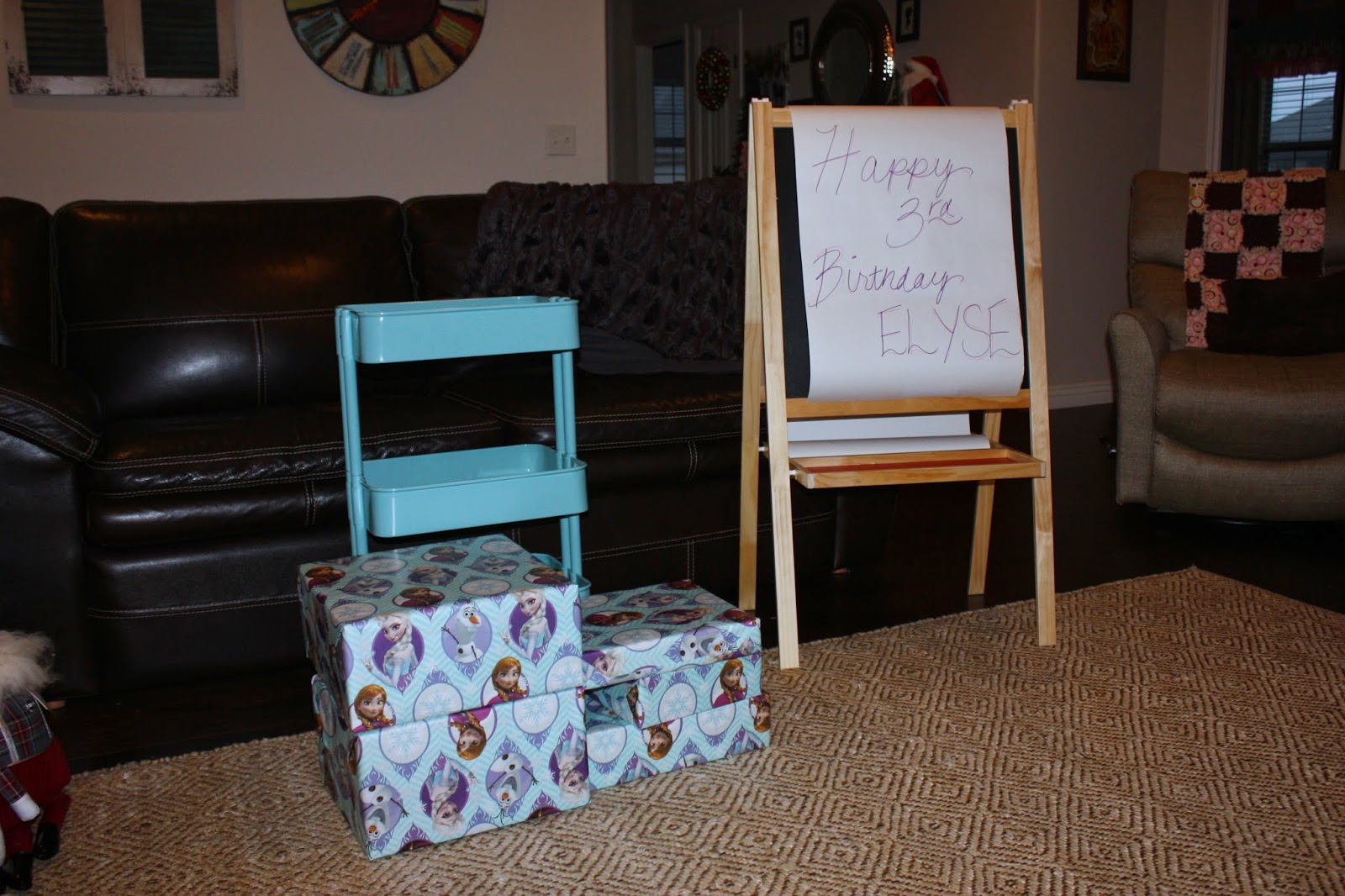 Hubby & I split the birthday budget again and neither of us really knew what the other was purchasing.  I went the traditional route with a new game, pink Hunter boots, and a Melissa & Doug 3-tiered birthday cake.  But Daddy definitely won the prize with a Frozen microphone set, and an Elsa dress!  She was in LOVE!!! 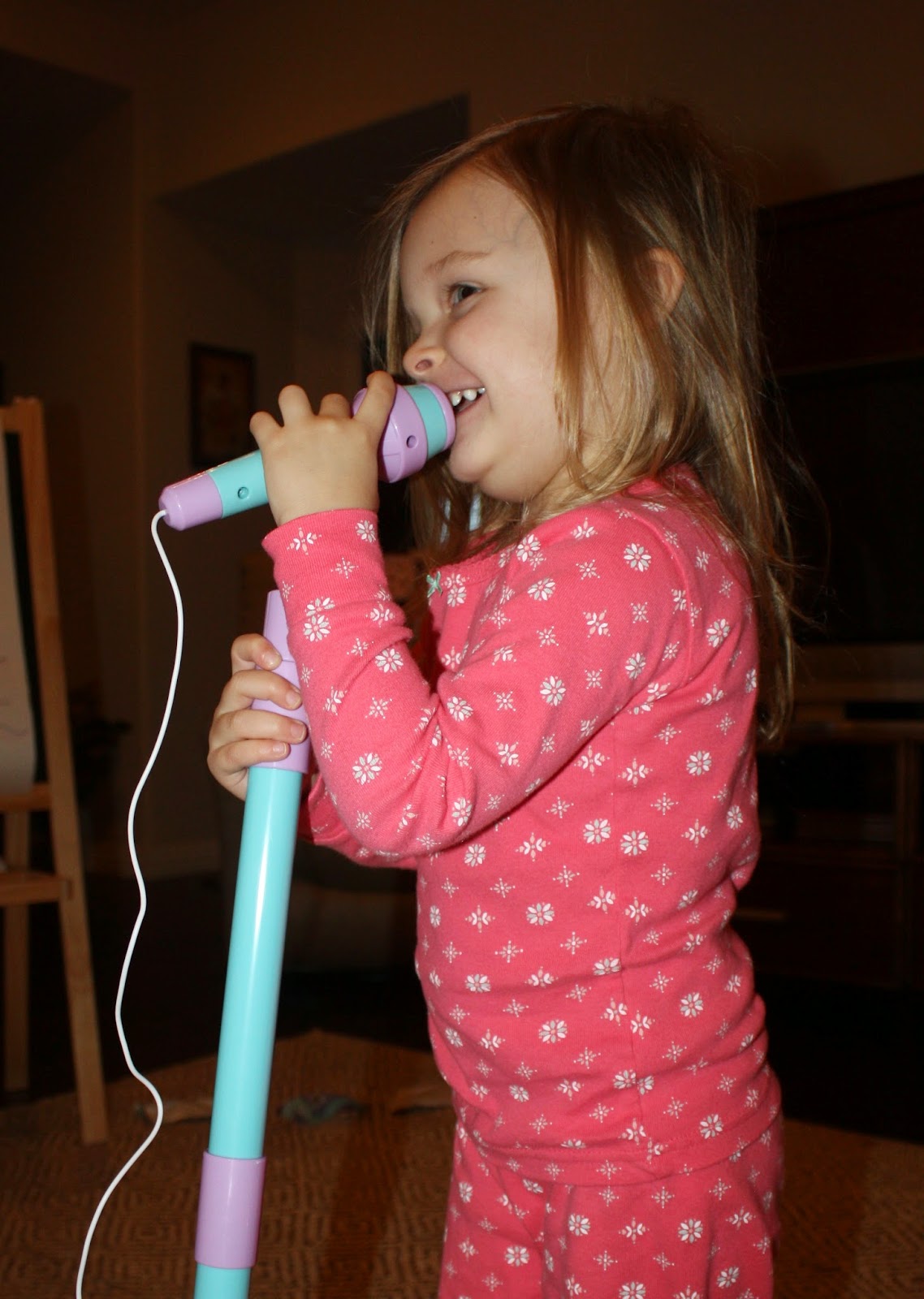 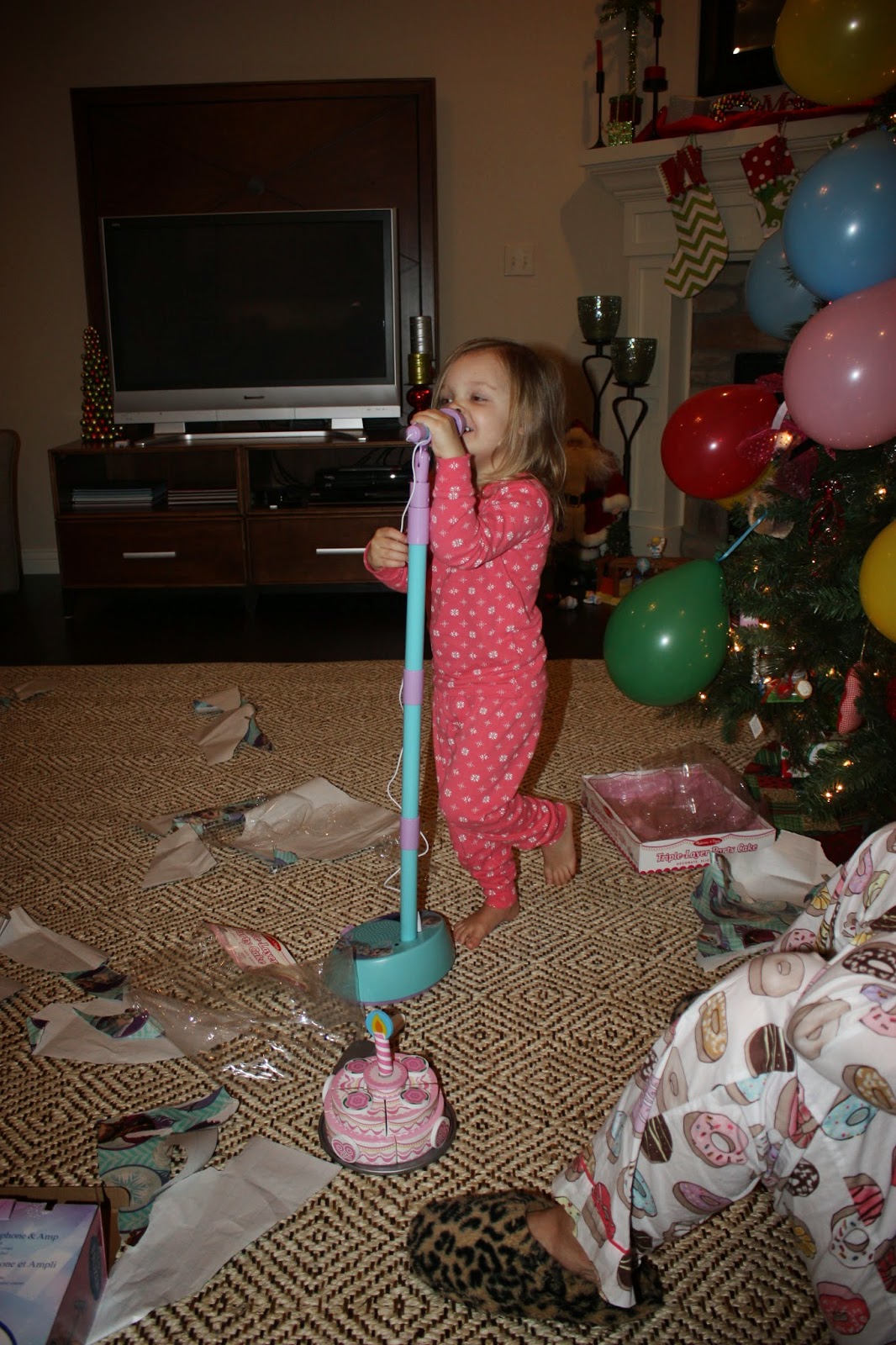 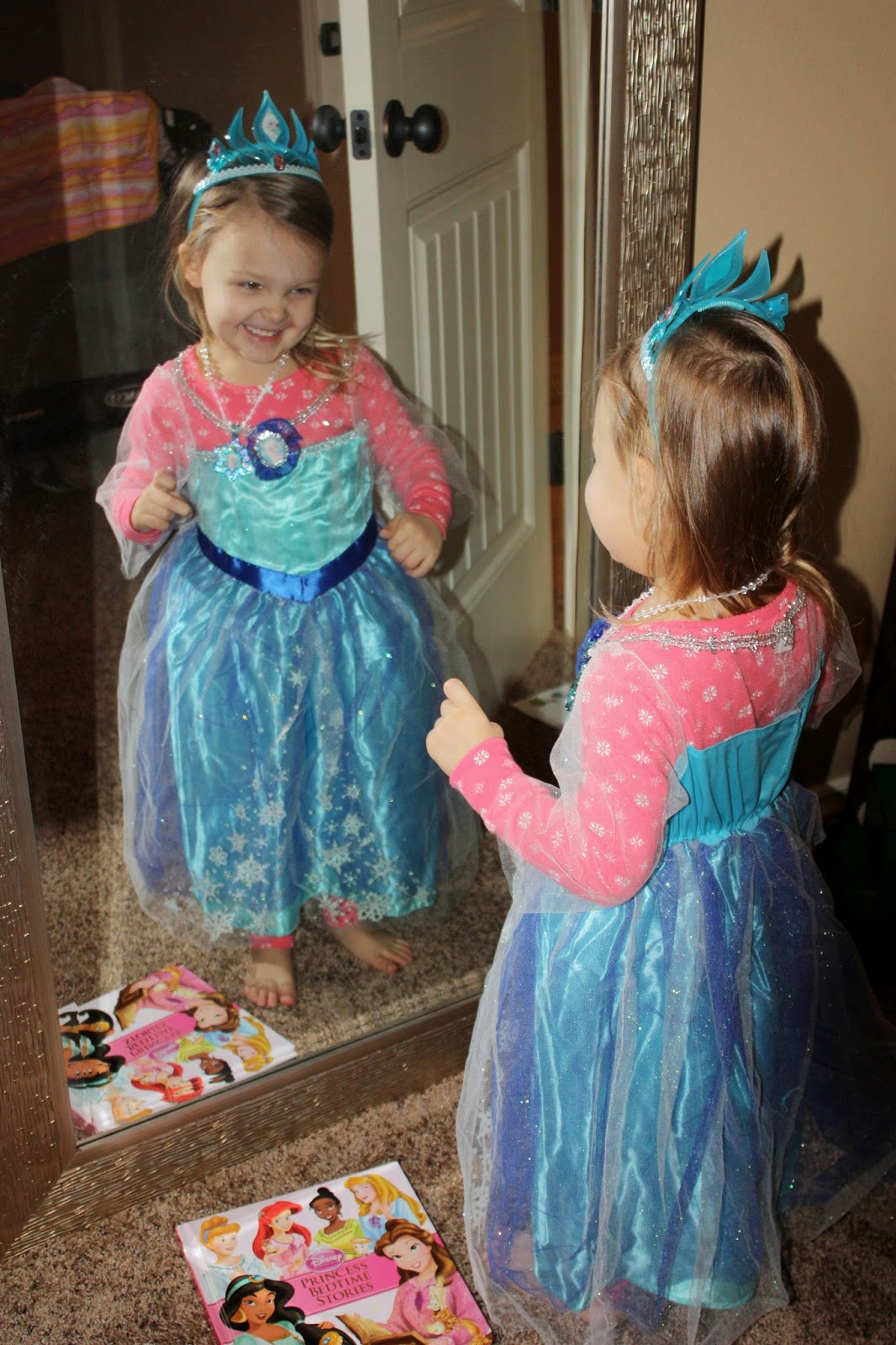 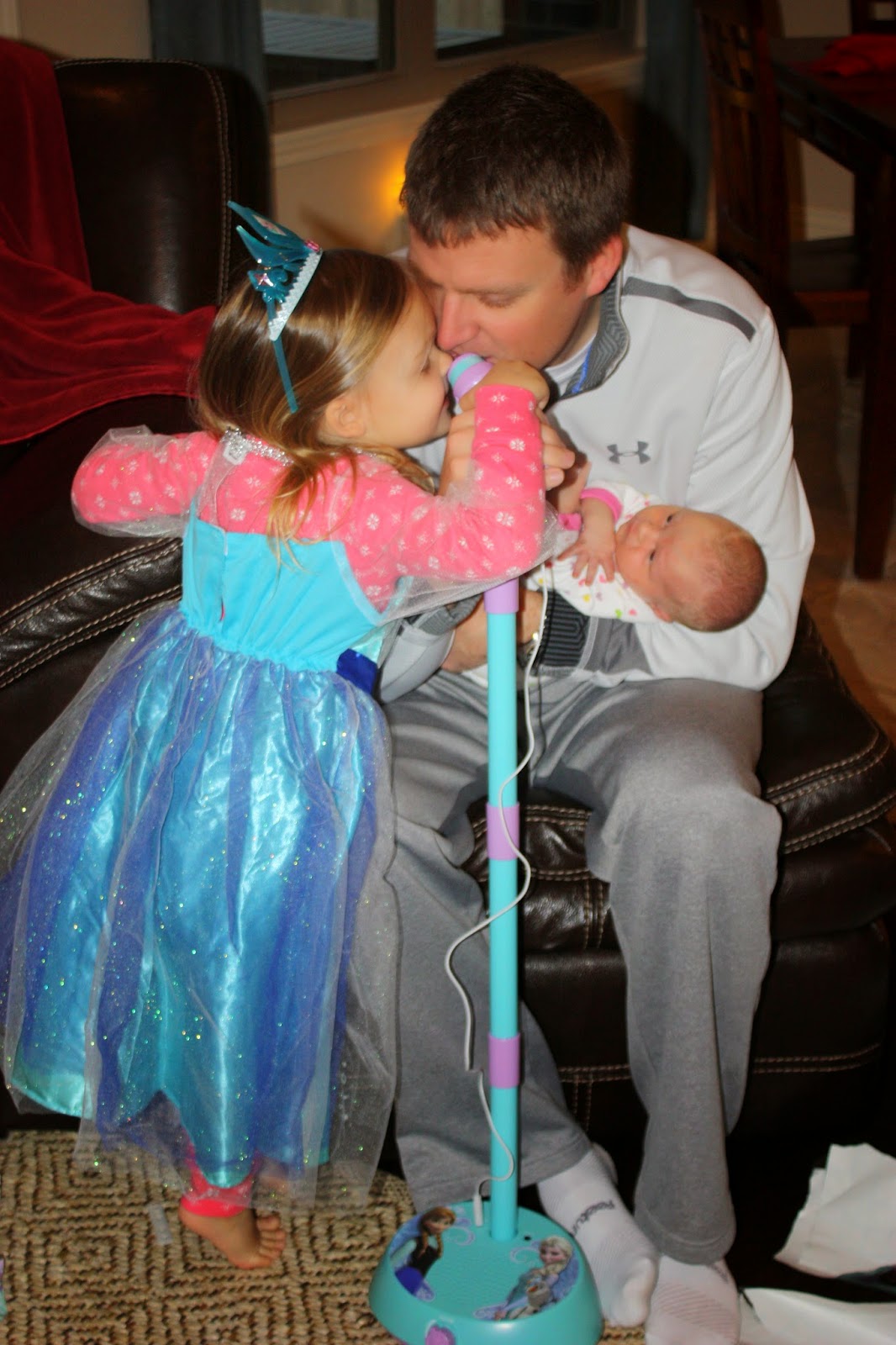 For the main celebration, most of the prepwork was pretty simple and I purchased most everything I could before Nora even arrived.  I also sent Elyse to spend the day with Gigi the day before the party so I could get the house ready to go.    We had a simple party on the morning of Elyse's actual birthday that included donuts (of course), fruit, punch, and a pink cake with sprinkles (because this was Elyse's request)!  The guest list was limited to close family, and 3 of Elyse's friends (only 2 of which could come) which still meant a pretty good party, but it was certainly manageable. 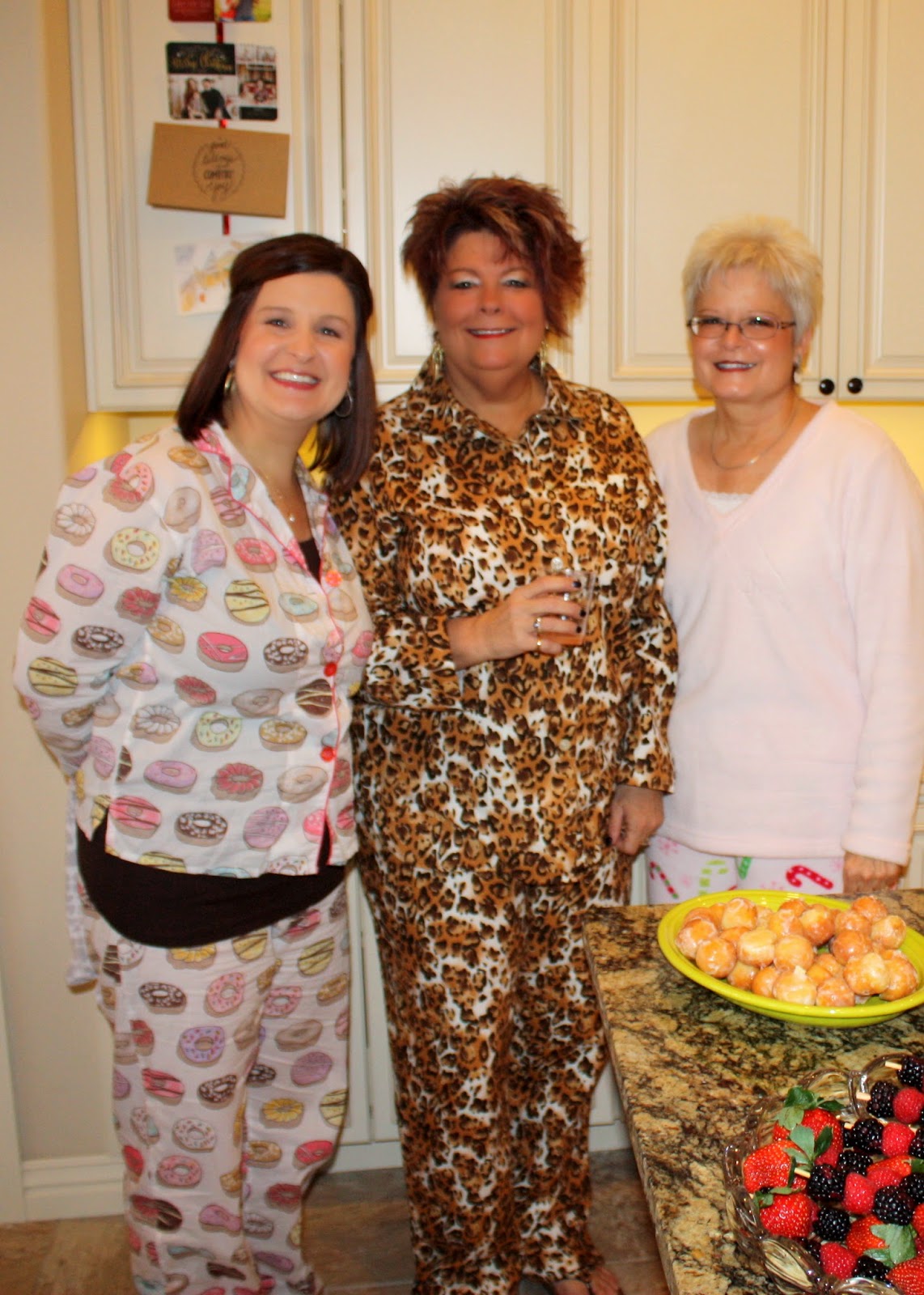 For food, I assembled fruit skewers and made punch, my mom made the cake, and all the various donuts were purchased from Walmart or our favorite local donut shop.  So...all I had to do was put together the presentation like I wanted it.  Simple & easy! 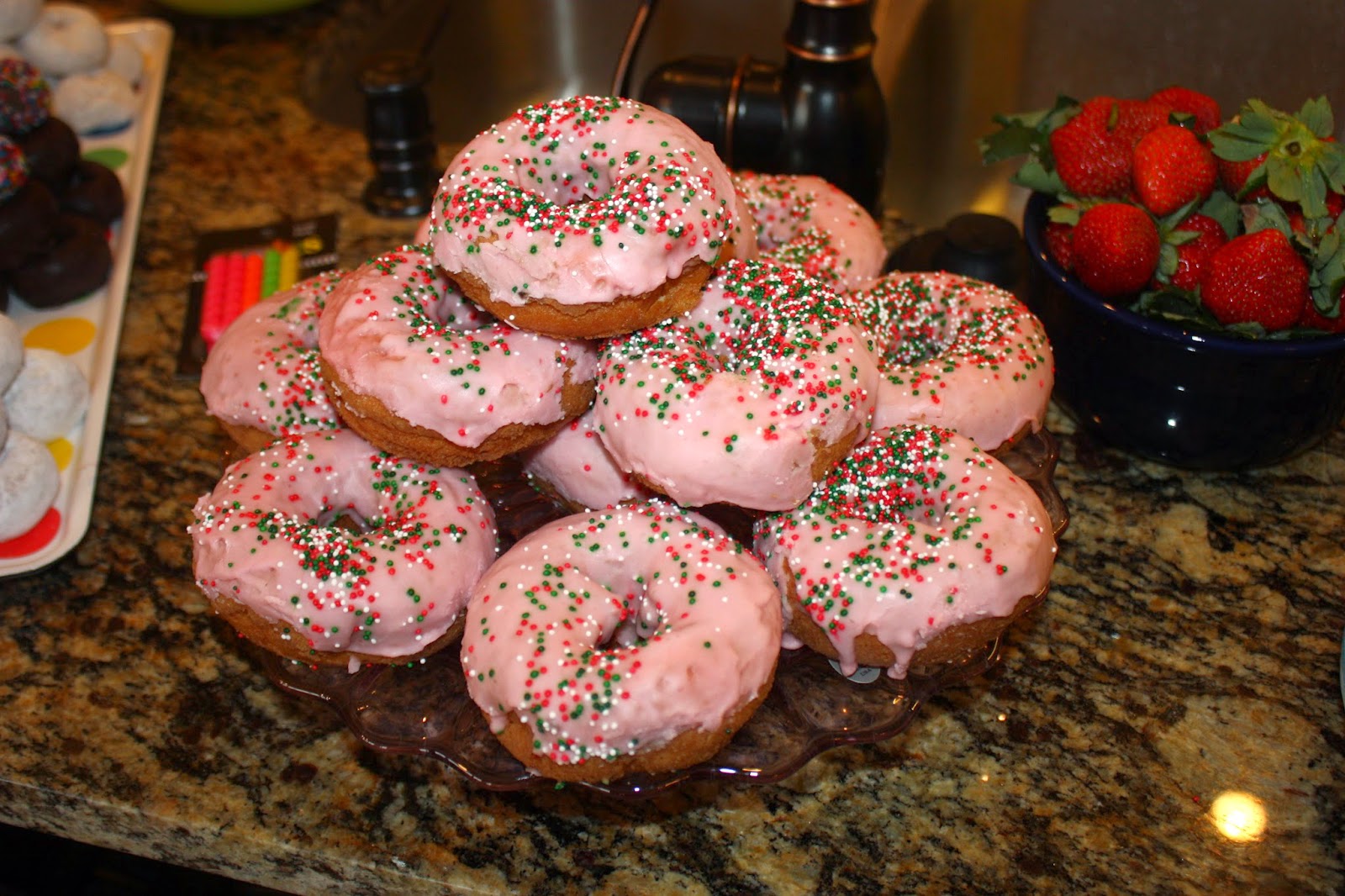 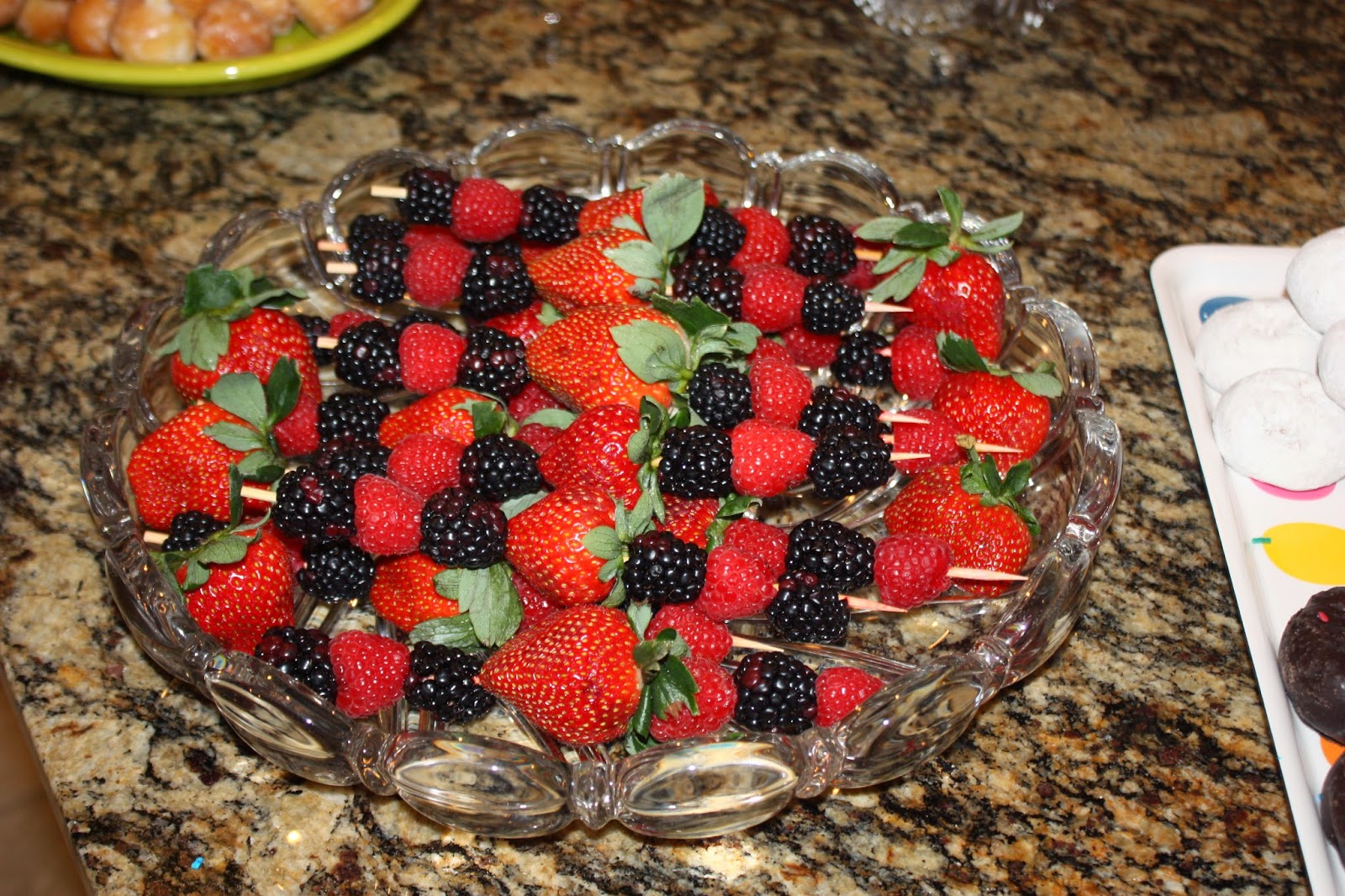 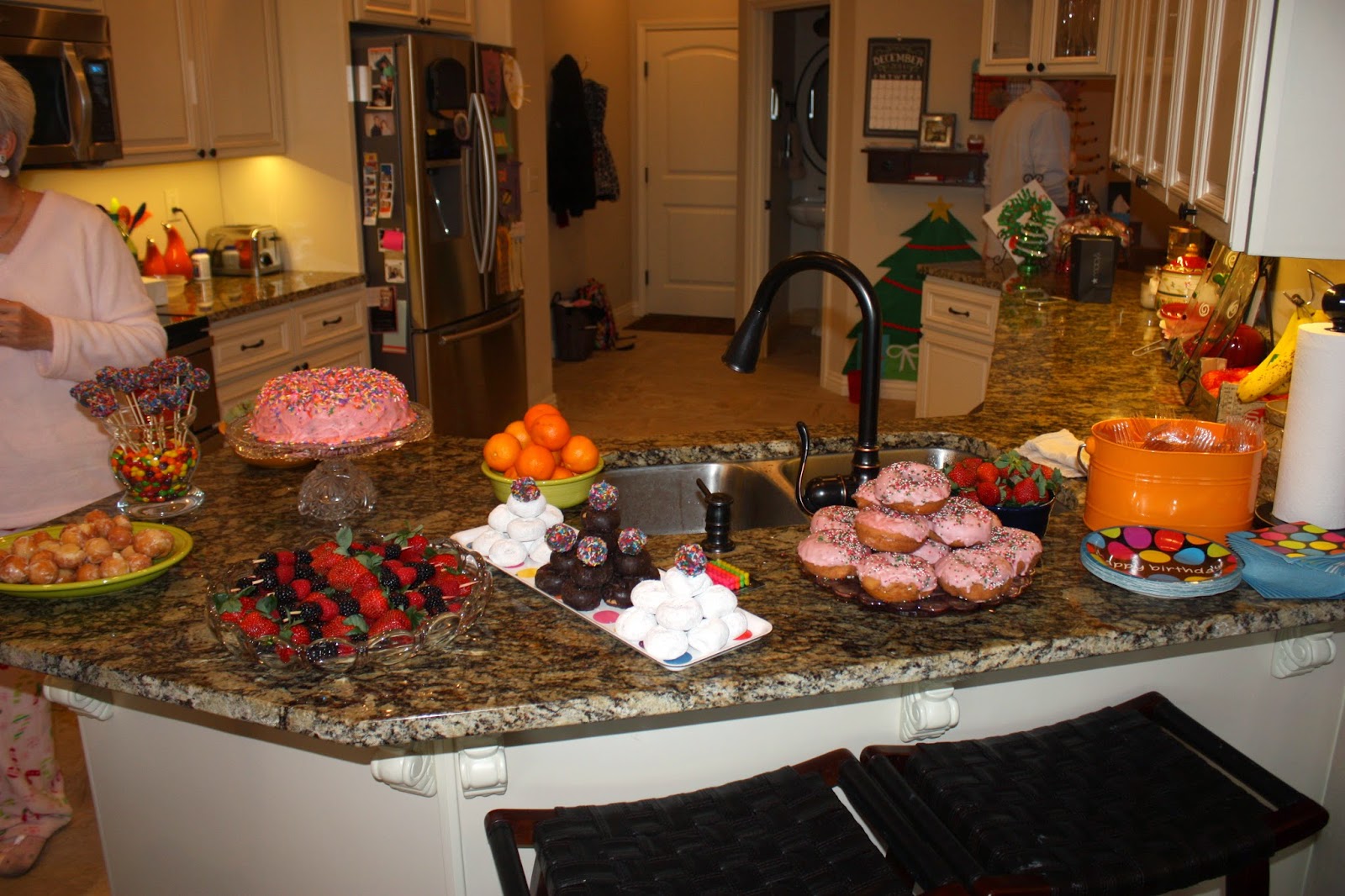 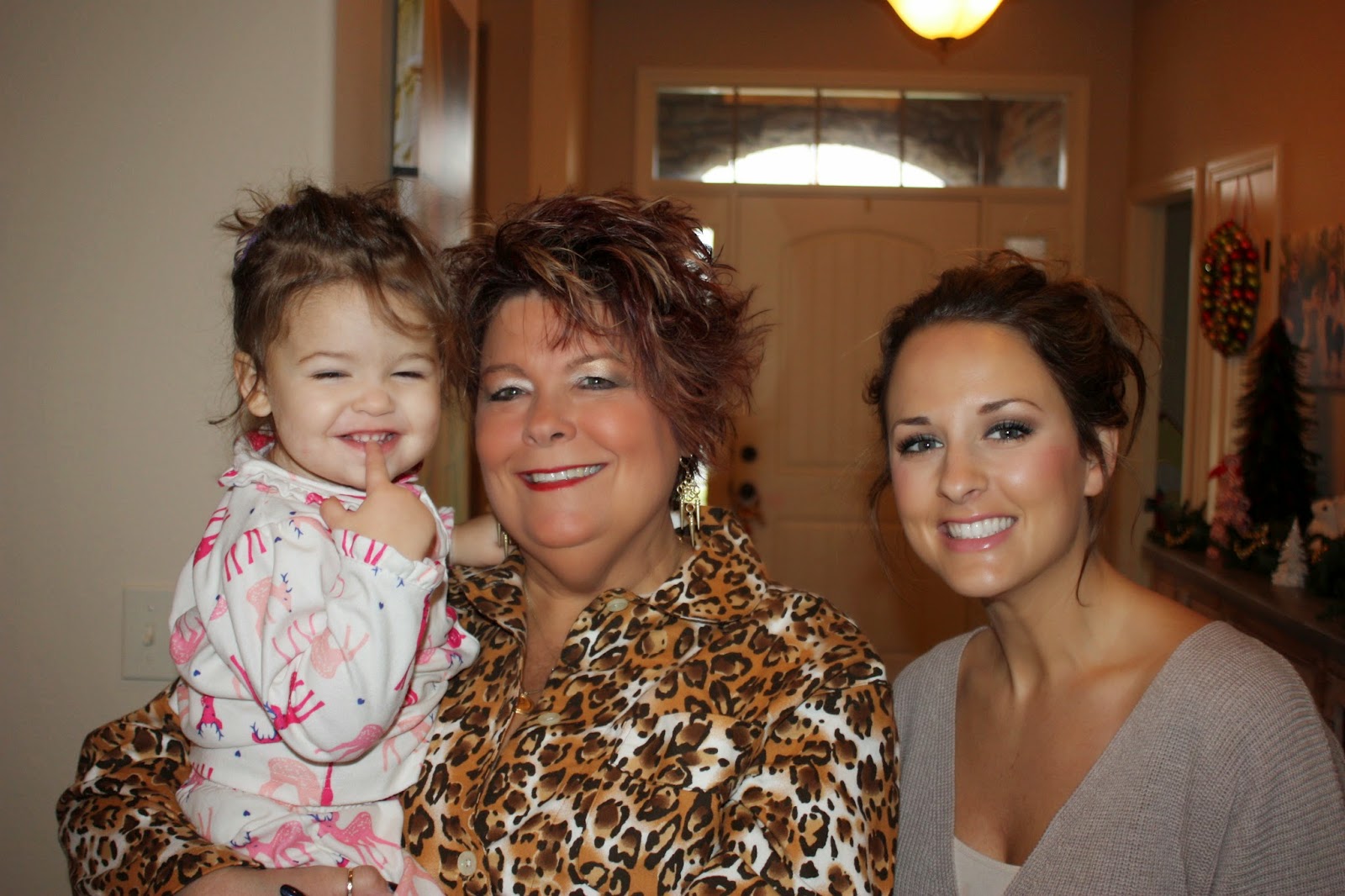 With having a newborn at home, and with this mainly being a family party...we played no games, had no party favors (besides leftover donuts), and I think everyone had left by 11:30.  Which was none too soon as the birthday girl had HAD ENOUGH  of sharing her new toys, being told what to do, and just general sensory overload!

Lots of presents were a big hit...but check out Elsa on her new PonyCycle from Mamaw & Pappy! 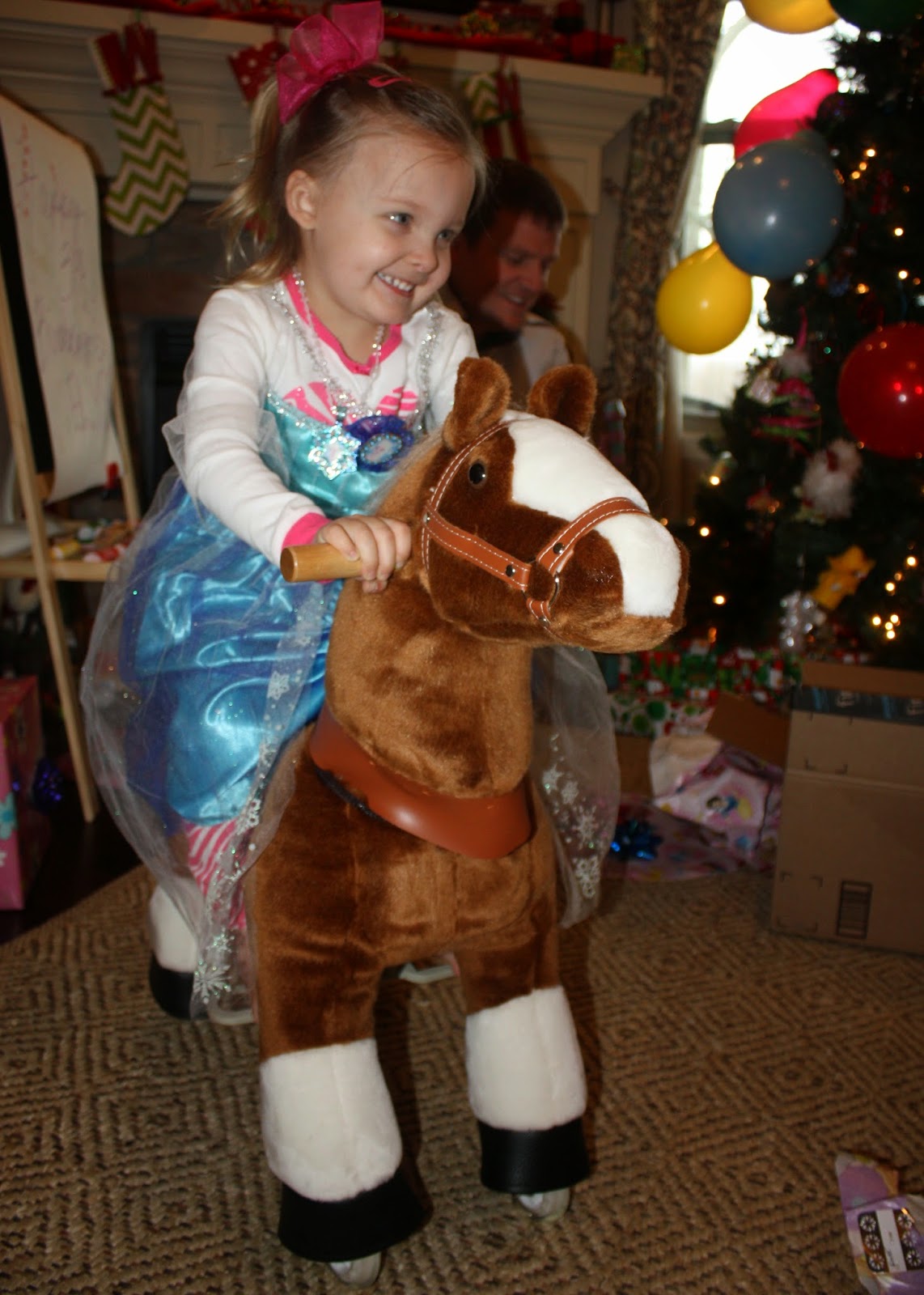 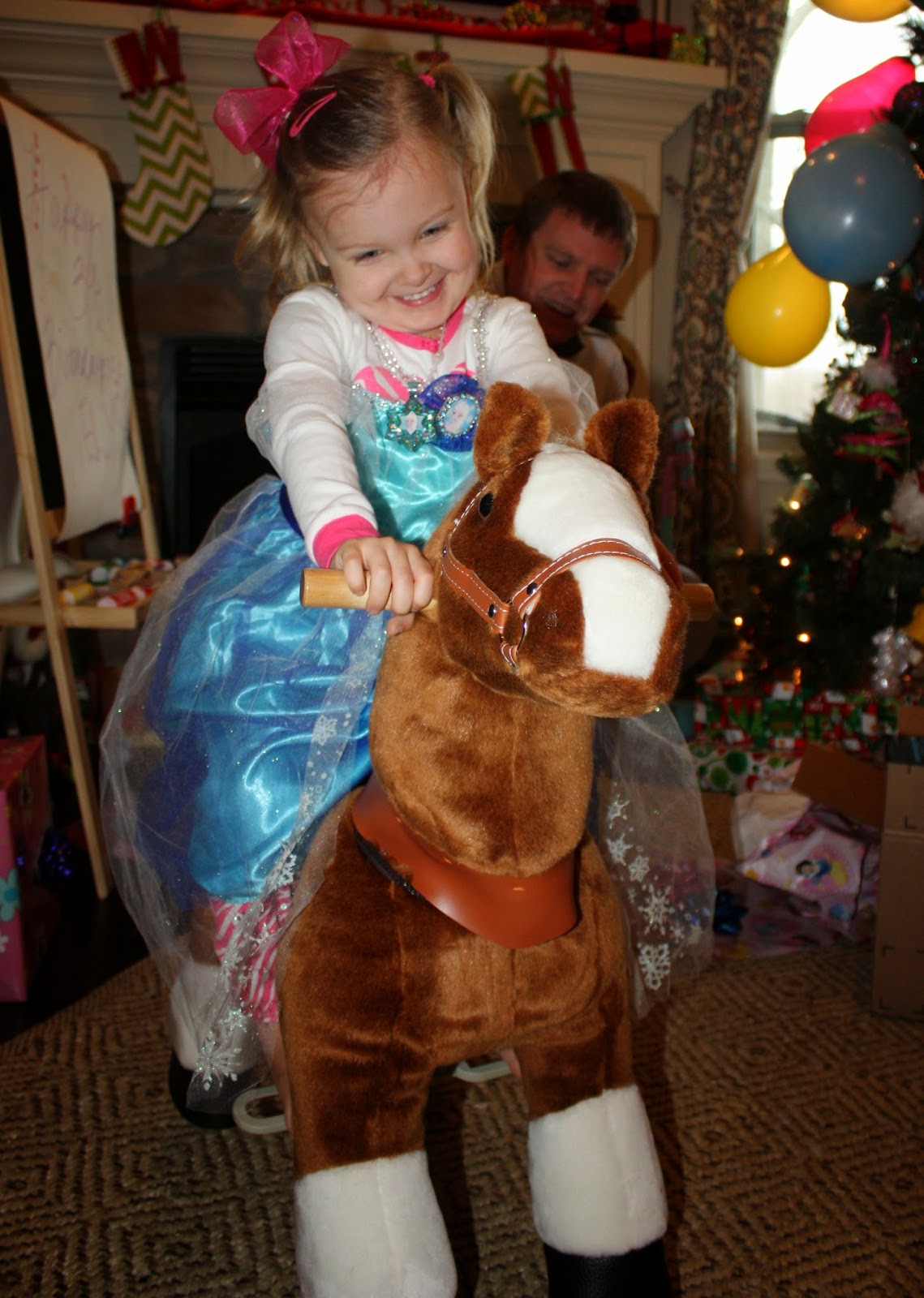 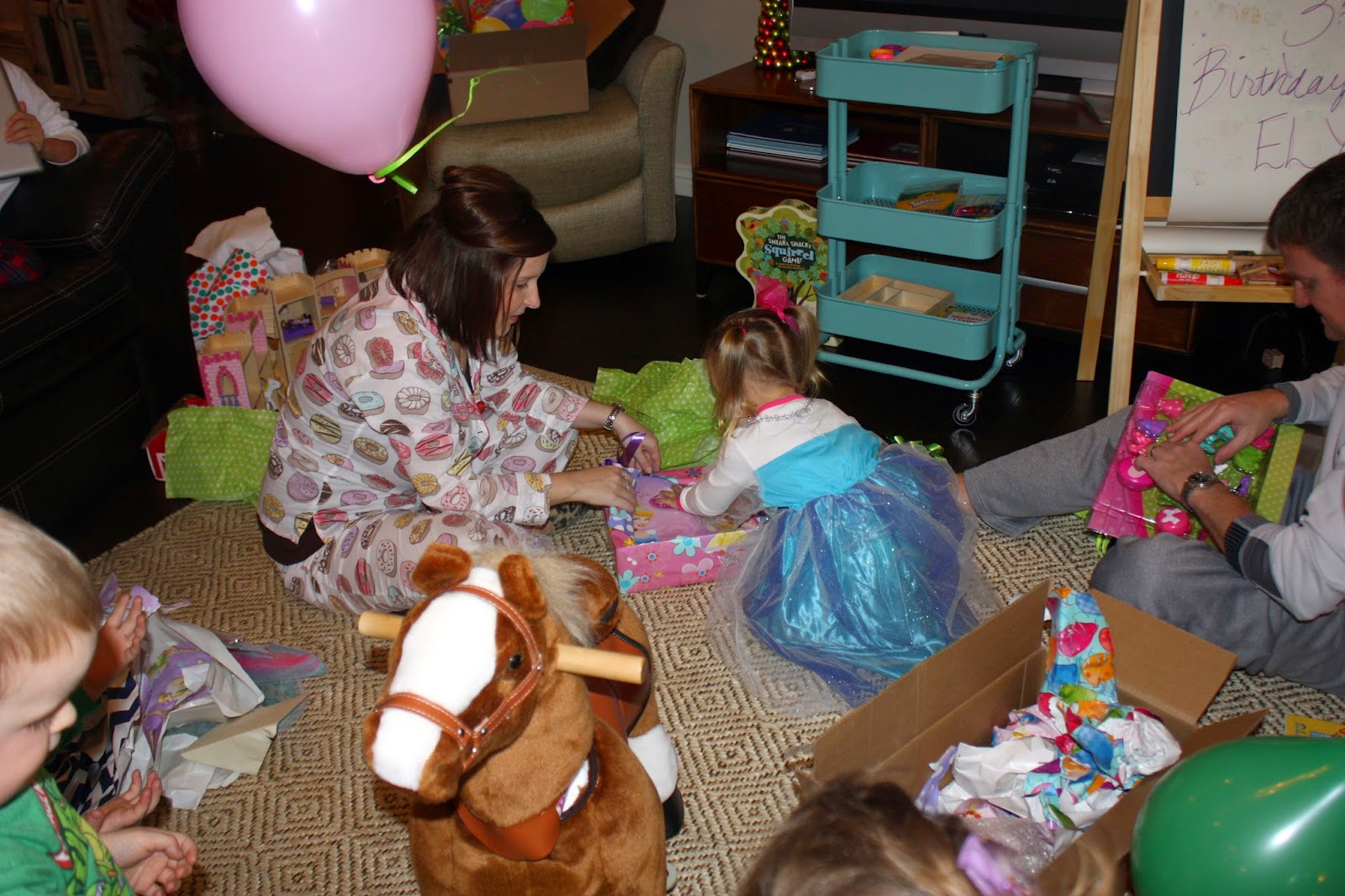 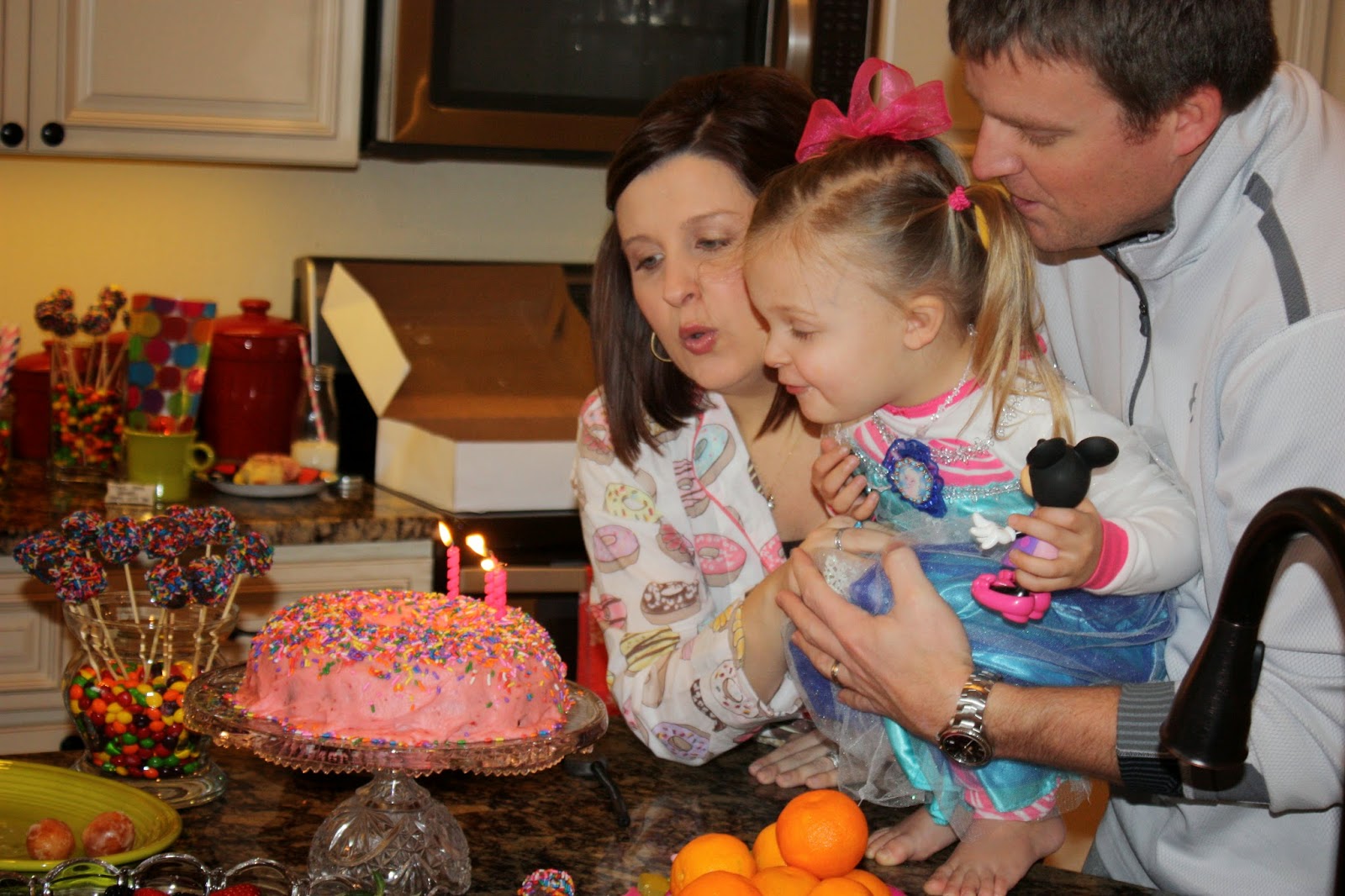 Overall it was a fabulous party and I'll be tempted to do a pajama theme every year!  Lots of guests even participated in the pajama theme which made it even more fun and relaxed!  I seriously can't believe my baby girl is 3!  Where does the time go!?
Posted by Lauren at 2:39 PM