Thankfully this month was much easier in the photo shoot department...she has really learned to ham it up for the camera!  I think we might have a little Miss Photogenic on our hands! 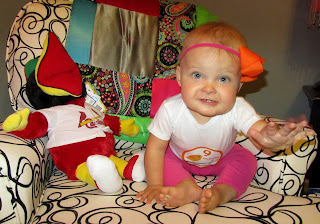 Weight/Height: At her 9 month appointment she weighed 17 lbs, 13 oz but I honestly can't remember her length (and I'm at work so I'll have to update this later).  She's back in the 25% for weight, and still in the 75% for height...her skinny minny features continue on! 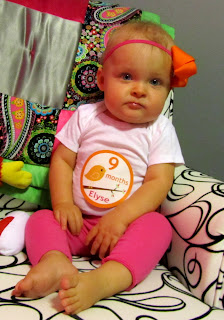 Clothes: Any leftover summer items are still 6-9 months, but as for everything else she is wearing either 9-12 months or 6-12 months depending on the sizing.  So far she has been right on with clothes sizing which makes it easier for people (aka Mamaw & Gigi) to buy new clothes for her.  I've got two huge totes full of clothes that are gonna be heading to the attic soon...it's so crazy how fast they grow!  She's still wearing size 3 diapers and with her tiny little waist that probably won't change anytime soon. 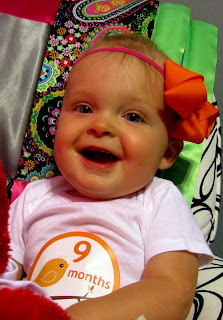 Food: As of her 9 month appointment we were given the go ahead for her to eat basically anything except:  cow's milk, eggs, honey, shell fish, and nut products.  We were planning to wait until close to a year on all of these foods anyway since they are high-allergy foods.  Otherwise she's been eating incredibly well and seems to enjoy a lot of the foods that we give her. Favorites are still sweet potatoes, avocadoes, bananas, apple sauce, and green beans.  We've also started giving her some yogurt for breakfast and chicken at certain meal times.  She's willing to try almost anything and hasn't spit much out!  Papa even gave her a dill pickle the other day and she loved it!  In addition to 3 meals of solids a day she's also still taking 4 bottles throughout the day.  We had period where she was wanting to nurse in the middle of the night but we seem to be past that so I'm hoping it was just a 9 month growth spurt. 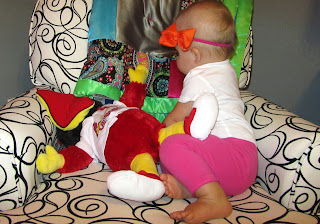 Sleep: Sleep?  what's sleep?  or at least that's how it felt for most of month 9.  Wow, her sleep schedule was all over the place.  Naptimes never seem to be affected too much, but she was not sleeping well at night at all and for several nights either Hubby or I would end up sleeping with her on the couch.  And sleep in Destin...yeah, not so much.  Again several nights she ended up sleeping with one of us with the other went to another room.  It was obviously a new scary place so we're hoping that was most of it.  Even though we're now into the 10th month, sleep the last 2 nights has been wonderful so let's all cross our fingers...k? 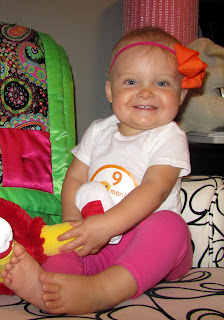 Activity:  Crawling, crawling, crawling, climbing (see previous post), standing...yeah, it's a whole new ballgame!  She is moving everywhere and is now able to follow us if we move from room to room.  This has also made showering extremely difficult if I'm the only one at home with her.  She still really enjoys her walker and loves to roam around the house as we're moving about!  She loves to talk into a large cup, or sand bucket, or measuring cup and hear the echo it makes.  She also really enjoys all of her small hand-held toys and is very interested in all of the little details on each item.  She has mastered the art of banging 2 objects together or banging one on the floor to make noise and is so proud of herself.  This age is probably my favorite so far just because she is so responsive to everything! 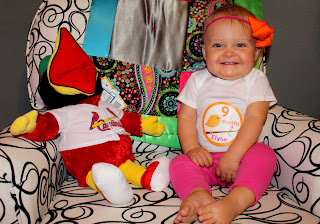 Personality: I am seriously so in love with our baby girl.  She makes me smile every single day and I truly can't believe how big she's gotten.  She is still very independent when she wants to be but is also going through a little bit of separation anxiety from her momma.  It breaks my heart when I pass her off and she cries...but I know it's just a phase and she's normally over it as soon as I walk from the room or she finds a new toy to play with. 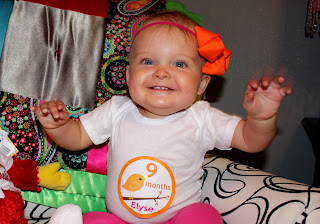 Communication:  I've decided to add a new topic just because Elyse has become so incredibly verbal in the past month.  She is making all sorts of new sounds & I think one of my favorites is when she's really focused she says something that sounds like "giggle, giggle, giggle"  it is absolutely too precious.  She has also said something to the effect of "hi da!", "hey daddy", or "hey da" several times when Hubby has walked into the room.  While we haven't been able to get her to do it on command, I'm pretty sure she knows exactly who he is....I'll guess I'll let him have that one "first" of his own.  I think she's also incredibly close to learning how to wave bye-bye, just a little bit more work is needed on that one. 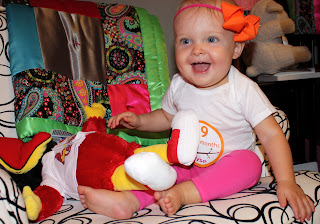 Likes:
~cups: of any shape & size as long as she can "talk" into them
~bathtime:  this girl is a swimming machine, she loves to just plop herself over on her belly and swim around reaching for toys
~momma & daddy:  her eyes just light up and she's started happy screaming when we walk in the door to pick her up after work
~jewelry:  she is fascinated by all things shiny & sparkly (a girl after my own heart), a necklace or bracelet or watch is sure to buy us a few more minutes of entertainment if needed
~life in general:  we have such a happy happy baby...I know I've said it a thousand times but she is normally always so happy unless she's tired or hungry!
Dislikes:
~diaper changes:  I think she's decided that diaper changes are a waste of time and she would much rather be doing other things than laying on the changing table. 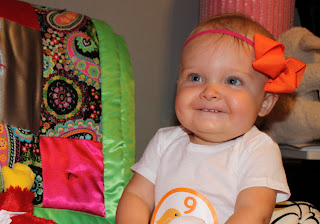 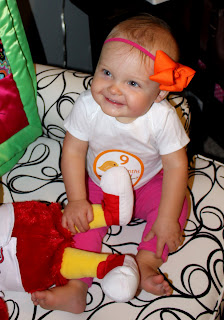 TracyZLesh @ Then I Got To Thinking said...

She is so adorable! Can't believe she is already 9 months old :)

Too cute! I love her headband in these pictures!

I can't believe she's getting so big! She is such a little ham too! The photos are great. I love all the details in your updates...it makes me so excited for all the things Mac will be doing in the future.

She's so cute!! They get so hard to keep up with at this age but its alot of fun too!

I can't believe she's already 9 months?! What a big girl!

She is too adorable! I can't believe it's already been 9 months!

I love this update. Arent they cute when they follow you every where? Too cute to listen they baby talk too. AOI are similar in weight and clothes size :)