I seriously cannot believe how fast Elyse is changing & developing, it makes me so excited for what to come but so sad to think that time is passing by so quickly.  We had another fun photo session this month...I feel like I might as well say "cheese" and she'll smile at the camera!  ha! 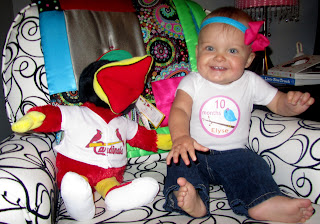 Weight/Height: I don't have any official measurements this month, but I know she's still growing.  Her precious chubby cheeks are plenty of indication for me that she's still a growing, healthy baby! 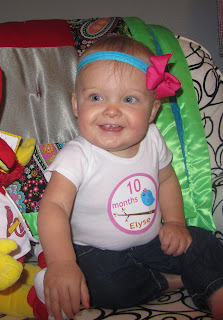 Clothes: We've moved into all 9 month or 12 month clothing at this point.  She's going to need some new sleepers soon, because with her length she's bound to outgrow those in another month or so.  She is still wearing size 3 diapers and we'll be sticking with that for the time being.  Anything new that we purchase is either 12 months or 12-18 months simply so it will make it all the way through the winter....fingers crossed!  She is wearing size 4 shoes & honestly doesn't seem to mind having them on. 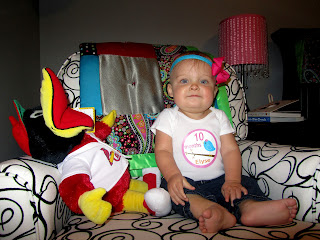 Food:  I love that we have such a good eater on our hands!  We've been trying to transition her to items that she can easily feed herself for quite some time now.  I just have a few different puree's in the freezer that I need to use up.  She loves almost anything that she can feed herself & if we're eating, then she wants to eat as well.  She's started to lack an interest in carrots, but I'm hoping that's just a phase...if not, oh well, she eats plenty of other veggies.  It's so nice that we've been able to start feeding her from our own plate, especially when we go out for dinner.  She is starting to have a snack 1-2 times a day & Cheerios are definitely a favorite.  She also LOVES dill pickles!  Guacamole/avocado is also still a favorite...but just not the guac from McAlister's Deli.  I made the mistake of giving her some without taste-testing it first and it was quite spicy.  She did not enjoy that at all & we couldn't get the "hot" taste out of her mouth quick enough...note to self, be a taste-tester for your baby!  ha!  She is also still nursing/taking a bottle of expressed milk 4 times a day...normally an hour or so before each mealtime and then again at bedtime. 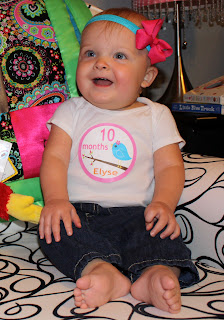 Sleep: Wow...we've had major developments in the sleep department since last month.  If I'm being completely honest, she started to sleep through the night again right after she fell on her head...not saying this had anything to do with her sleep habits, I'm just saying...;o).  However, her naptimes were starting to get ridiculous and even with CIO methods, she would cry right through all of her naps or only sleep for 30-45 minutes.  After a LOT of troubleshooting and even an Elyse day off work for me to try something...I think we've finally got her new schedule down.  Whether it was just a phase or something we changed, I guess we'll never know but my assumption is that she was overtired & just was past the point of no return.  For the most part, she now sleeps from 7:30-6:30 or 7, goes down for nap at 9 for 1-1 1/2 hours and then naps again at 1 for 2ish hours.  We are following Moms on Call (which I highly recommend, another post, another day) and even if she cries out in the night or during her nap we are leaving her be until official wake time.  So far we've had some pretty great success with it and she is going down to sleep while she's still completely awake. 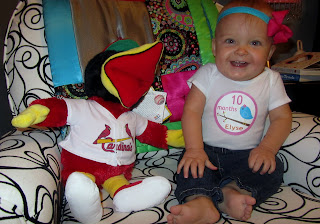 Activity:  Um....yeah, this girl is a busy  body!  She is everywhere, all time, and into EVERYTHING!  And while I'm sure I'll get frustrated with her getting into everything, it's also pretty stinkin' amazing to watch her little brain develop and to watch her learn about her surroundings.  She loves books and will sit & look at books on her own, complete with turning the pages, even if I'm working around the house or doing my own thing.  This may make me sound like a bad mom to some of you, but oftentimes she is so content to play on her own that I feel more like a supervisor just because she is perfectly independent.  She of course crawls over to me when she wants some attention, but it's so nice to be able to leave her playing in the floor while I fix dinner or do laundry or just do general household chores.  Our PAT teacher came over a couple of weeks ago & gave us several different activities to do in order to encourage various developments, one of them is playing with paper or magazines & she LOVES her magazines!  I have a stack that are just for her & are ripped to shreds, but she loves them! 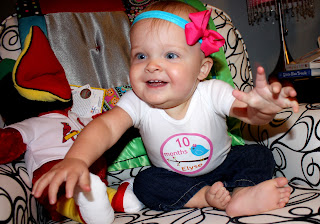 Personality: Along the same lines as activity, I think we have a very independent girl on our hands.  She enjoys playing by herself, content with me just being nearby and she just moves from toy to book to toy to book all day long.  She is such a happy baby and I can't tell you how many times I've heard that from other people.  She truly does smile so much and it fills this momma's heart with joy!  She is also learning the art of manipulation and we're starting to recognize those whiny "But I want it my way & I want it now" cries...we are trying to resist those so we can begin teaching her patience. 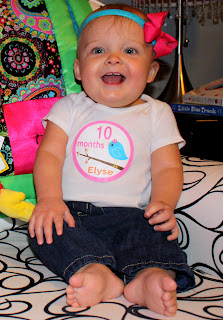 Communication:  She talks non-stop!  Especially right after a nap when is completely awake, she will take to herself, to toys, to books, and to nothing in particular...just making lots & lots of sounds.  She has started waving bye-bye on a fairly regular basis & has even started making sounds as she waves her hand in the air, as if she's trying to say bye bye.  It's so precious & certainly makes it easier to walk away when she's waving bye!  I haven't been very good about teaching her any signs, but I think we might need to start teaching her the sign for "more" at the table...it would be much preferred to her high-pitch squeals when she wants more yogurt in the mornings!  ha! 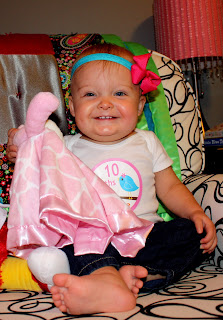 Likes:
~household items as toys:  she will crawl around with a clothespin or a long rubber straw or a measuring cup & be perfectly content to carry that with her!
~the Tickle-Monster:  If you haven't watched my video of her giggling, it should definitely bring a smile to your face!
~Food:  Elyse LOVES to eat, I'm just hoping this doesn't ever go away!  She loves to eat & wants exactly what you're eating!
~Susan Boynton Books:  She is starting to sit & listen to books for brief moments & these are always guaranteed to get her attention
~Mickey Mouse Clubhouse:  I really try to limit her tv time, but before her nap in the morning Mickey Mouse is on so we almost always have it playing in the background.  She loves Mickey & his friends!
~life in general:  we have such a happy happy baby...I know I've said it a thousand times but she is normally always so happy unless she's tired or hungry!
Dislikes:
~diaper changes:  I think she's decided that diaper changes are a waste of time and she would much rather be doing other things than laying on the changing table.
10 Month Milestones:
~First phone call:  911 9/19/12
~Fell out of crib:  9/19/12
~First Wedding:  Hubby's cousin Logan & Jessica 9/22/12
~Pulling up on everything: End of September 2012
~First teeth brushing:  10/4/12
~First overnight with Mamaw & Pappy:  10/6/12
Posted by Lauren at 10:12 AM

Glad the sleep schedule is on, it is such a life saver, isn't it?? Happy 10 months old, baby girl!

She is doing and experiencing so much! How fun! And I love how she talks all the time..and I can't believe either how she is almost one! Feels like just yesterday's I found your blog and you were pregnant!

10 months?? already! wow!! i just can't get over her cute little nose every time i see her photos

What a big girl she is! Wow! Growing up so fast. I'm glad she's doing so well with the sleeping issue. That means there's hope for us too, right? Man, I'm tired. What's "Moms on Call" like? I've never heard of that. Did you guys do CIO? I'm going to need a whole post on sleep training.

Look at how big she is!! Elyse has so many teeth for a 10 month old! haha, and I love her first phone call :)

Oh goodness! I remember the week she was born! And she is already making her first phone call! :) Your little one is growing up so fast! And she's such a happy girl! I feel so privileged to get to see her grow!

Maybe she called 911 b/c she jumped out of her crib, hahahaha! Just kidding. How DID she call them?