Hubby & I had a pretty laid back weekend and I was very thankful for that because it was super hot outside. Friday night we had dinner at Old Chicago with another couple and their little girl Makenna. At 1 1/2, she is just a doll and was incredibly well behaved while we ate dinner. After dinner we stopped at Sam's to pick a few things & then came home to relax. We spent some time playing with Bogey and he certainly enjoyed playing in the water like always. 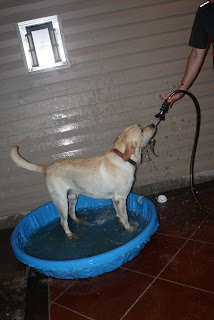 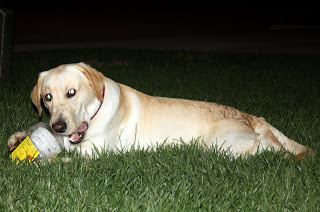 He also loves milk jugs or any large plastic container!

I had to work on Saturday morning until noon (but I left early thanks to it being slow) and I headed back home to pick up Bogey & Hubby. We headed down to my parents' house for the afternoon and had some great pool time. My brother & his wife also came down later and we had a wonderful family dinner of steaks, potatoes, spinach salad, and homemade peach pie (YUMMM!!!). It had been a long time since just the 6 of us had a meal together. After dinner we took all 6 dogs & headed up to my grandparents' pond for a little swim time for the pups. We had a blast & it was hilarious to watch them all get incredibly muddy! 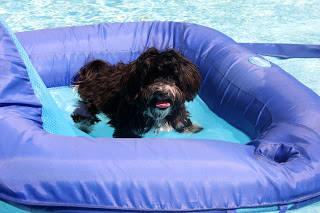 Josie really loves the water -- this was the perfect spot for her to keep cool! 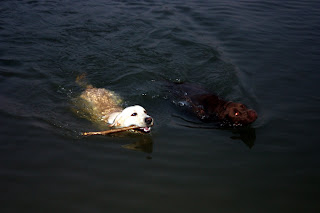 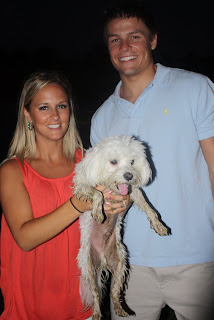 Nick & Millie with Romo who was incredibly muddy--but had a great time!
We went to church this morning, grabbed a quick lunch at a new little spot in town & then headed to do some quick shopping. Hubby & I both wanted something new for my cousin's wedding that's in Tennessee in a few weeks. It was tax free weekend here in Missouri and I was afraid that the mall would be really busy but it was actually not too bad. I found a new dress (possibly more than 1) & Hubby found 2 new shirts & 2 new ties--so he'll have some options...It was definitely a successful trip. We've finished up the day relaxing (aka napping while Hubby watches golf). Just another week of work ahead for both of us...it's supposed to be hot here again all this week...I think we're now paying for the unseasonably cool July that we had!
Posted by Lauren at 6:25 PM

My dog loves plastic bottles too!

We have a yellow lab too!! Her name is Missy and she is ridiculously spoiled. She loves plastic bottles too and pretty much anything else she can chew up.

dont you just love dogs?!? what would we do without them?

Weekend Rewind!!! Woo-hoo!!! Sounds like a really great weekend! Love the pictures ;) Thanks for the sweet comment about my name! Lauren was the name my mom wanted… but you’re right… Very common in the early 80’s! :)