I can't believe this will be my last monthly update for Elyse Ann!  Of course I'll still do updates and my blog will still mainly focus on her...but the sticker pictures are finished.  ;o( 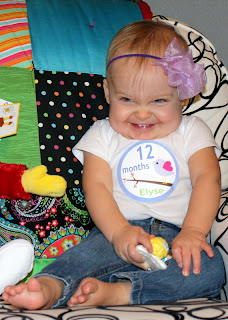 Weight/Height: We go to the doctor for her one year check up this morning. We'll get her official measurements then.  However, I would say that we are still probably around 28-30" tall & she weighs about 20 lbs.  She is eating table food like crazy but since last month I feel like her face has thinned up a bit...probably from all that moving since she never sits still for very long! 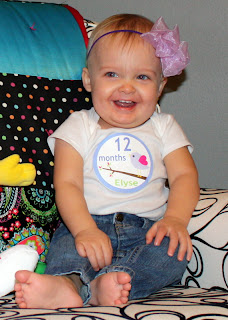 Clothes: She is wearing all 12 month things now, except for any new sleepers where we've moved her to 18 month so she can kick her little legs.  I'm afraid that in the future she's going to outgrow her clothing because of length...which makes some things seem really baggy!  Anything we buy her for the Spring will be 18 month size...just so we can get lots of wear out of it!  We have moved onto size 4 diapers and should be at that point for awhile.  She is wearing size 4 shoes. 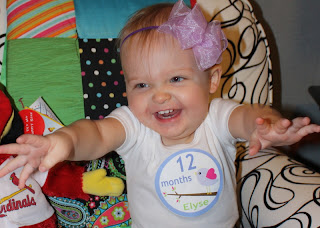 Food:  This girl is such a good eater!  We certainly have our days when she decides she doesn't like to eat, but then she wakes up the next day & will eat practically anything you put in front of her.  Yogurt & blueberries or raspberries is still the favorite for breakfast; although I think that scrambled eggs might be a close second once I start giving eggs to her more often.  She LOVES cheese & bread so we have to be careful to give her any veggies before we offer those things or she will never eat her veggies.  She also still loves her fruit, but really just wants to eat whatever we are eating.   She is eating pretty much anything now & after her appointment tomorrow I plan to start transitioning her to whole milk at least during the daytime.  We'll see how that goes.  As of now she is still nursing or taking a bottle of expressed milk 4 times a day, although the quantities for her 2 daytime feedings have greatly decreased from what they used to be.
She also is a little bit like her momma and once she's hungry, she's hungry.  She becomes a little bit of a grumpy bear if she gets overly hungry so we've learned that she needs a scheduled snack before lunch and before dinner. 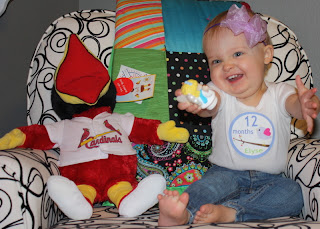 Sleep: Overall sleep has been wonderful.  She is going to be anytime between 7:30-8:00 and waking sometime between 6:30-7:00 most mornings.  For the most part she seems to only want to sleep 11 hours a night, so regardless of when we put her down she will wake up at the 11 hour mark.  She is still taking two naps a day for a total of about 3 hours & goes down without a fight.  She was a little under the weather on her birthday and I think she's working on some new teeth so that has made for some difficult nights recently, but we'll get back on track.
She is currently still sleeping with her pacifier...two actually.  She sometimes manages to toss one out of the crib so we put another one in their for backup.  We'll work on that after the first of the year, but right now her sleep is so wonderful that we don't want to rock the boat with the holidays coming up. 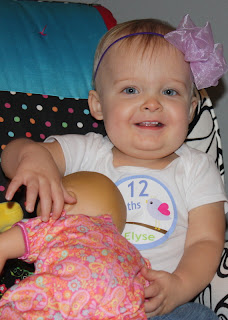 Activity:  Activity defines her.  She is EVERYWHERE!  Nick installed more child safety locks in the past month so now she only has certain drawers that she is allowed to open, and subsequently empty all over the floor.  She still prefers to crawl, but ladies & gentleman...WE HAVE A WALKER!!!  She took her first steps right at about 4:45 the day before her first birthday.  Which is a good thing, because her daddy had a deadline and we might have to kick her out of the house...ha!  Just kidding.  Everyone says that everything will change now that she can walk but honestly I'm not sure how that could be.  She reaches for everything, pulls up on everything, and gets into anything & everything she wants to even now.  I could be proven wrong, but for now it seems like she's just as dangerous crawling! 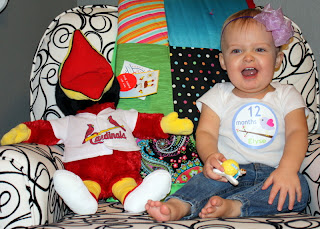 Personality: We have a little ham on our hands!  She laughs & smiles & giggles and warms the hearts of everyone around her. She is consistently a little quiet when in a new place or around a lot of people, but quickly warms up & plays with whoever is nearby.  Church nursery, family gatherings, restaurants, small group...it doesn't seem to matter, she's happy wherever as long as she feels comfortable with those who are around her.  Thankfully she's also incredibly flexible and doesn't seem to mind if she's on the go.  I'm so thankful that she will go to sleep in the car & transfer to her crib without hardly a peep...makes things so much easier! 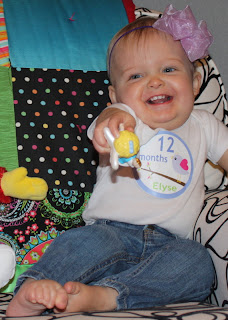 Communication: Along with our ham comes a little talker...which may have been passed down from her momma. She talks all the time and we are beginning to understand her more & more. While she won't say most words on command she does say several words: Momma, Da (Dad), Dog, Uh-Oh.  She is also starting to say things at the right times that sound like Byebye & Thank you.  She has also started to initiate communication by pointing or waving at people or things without being prompted to do so.  It's so nice that she's able to start telling us & showing us what she wants.
And reading...oh reading.  This girl LOVES books.  She will literally sit & read a book to us, complete with turning the pages & saying something different as she goes through each page.  Sometimes we get the biggest fits when we try to take a book away from her because it's time to go or time to eat....we'll also be saving the books for last when it comes to Christmas presents, otherwise she won't pay attention to anything else.  ﻿ 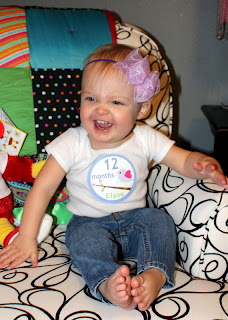 Likes:
~books. I really think this girl is going to be a reader, which means she may be a bookworm like her momma; but there are certainly worse things that she could love!
~Peek-A-Boo/Hide-N-Seek.  We get the biggest giggles and laughs from her when we peek around a corner and try to hide...I love the sound of her little hands slapping the floor as she crawls to try and find us.
~moving.   Unfortunately I think that cuddle time is for the most part...over.  She will come and sit in your lap for a brief moment but then she's down and on the move again.
~food.  See above...if you're eating it, she wants it.
~Cheerios. Man, don't try to take her snack-catcher of Cheerios away, the water works are definitely guaranteed to start!
~Emptying things. She loves to pull books off of shelves, empty her dishes drawer, pull clothes off the couch, or pull clothes out of a laundry basket.
Dislikes:
~diaper changes: this is still a daily battle.  Thankfully she still fits on her changing pad which keeps her somewhat confined because she just rolls into the back of the hutch.  However, I hate having to pin her down or making her cry just to change her diaper or her clothes.  Many times this has become a two person job & Hubby & I try to entertain her while we somehow manage to change her. 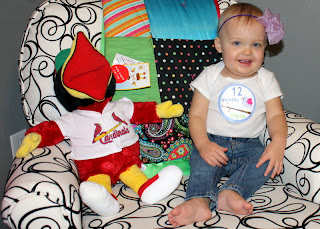 12 Month Milestones:
~First Thanksgiving-November 22
~First Temper Tantrum-November 28 when I wouldn't let her play with her Christmas tree
~First Steps-December 12
~8th tooth came through week of Dec 9
& this is what I dealt with as our photo shoot ended...

Elyse is an absolute doll!! Happy Birthday, Elyse!! When the holidays are over, we need to get Declan and Elyse together to play. :)

I can't believe it's been a year now Lauren - she's so big! The more she grows and starts walking and such the less she'll look like a baby. I miss the baby faces sometimes!